Archaeology of the Dingle Way 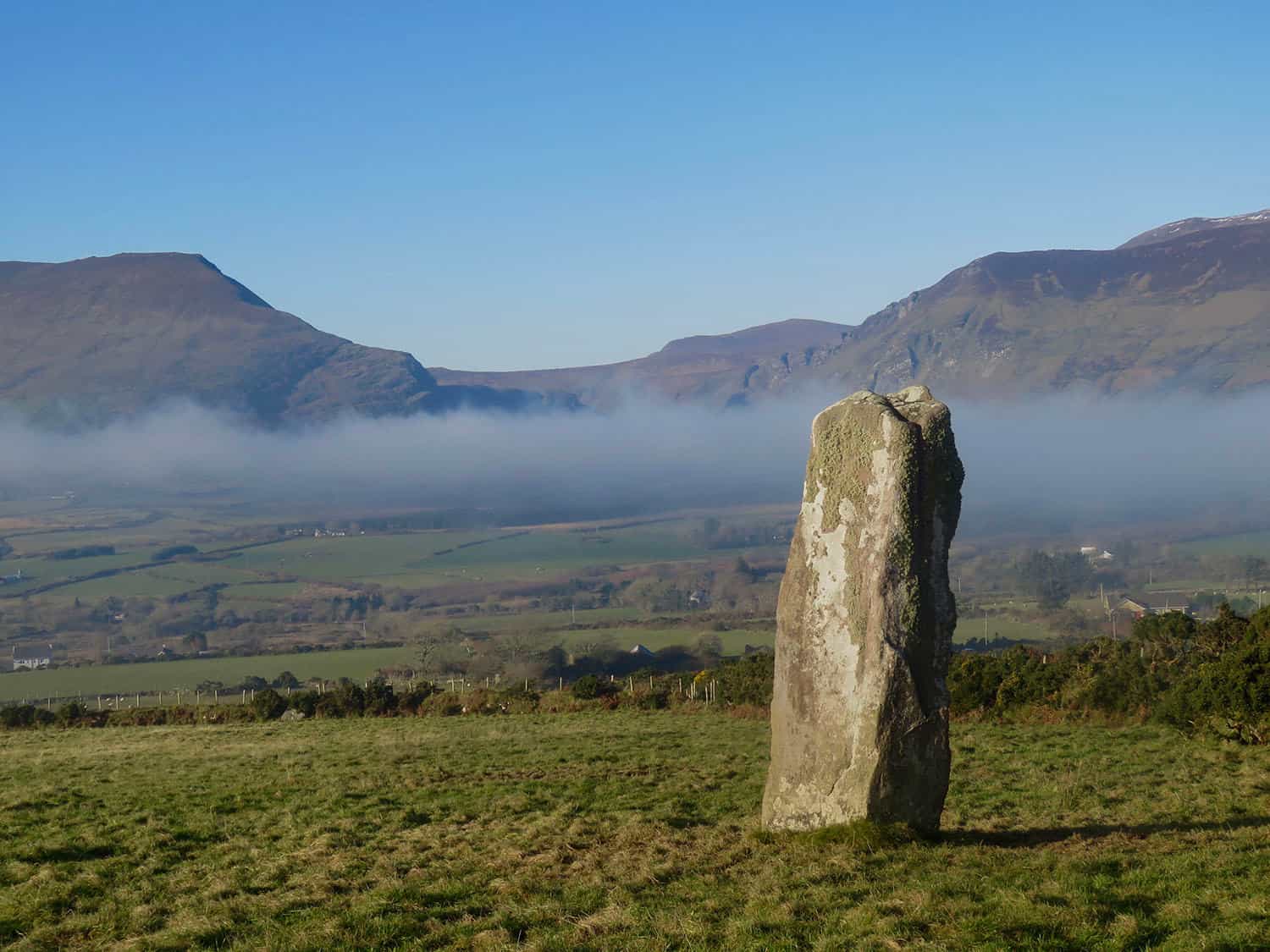 The Dingle Way winds along for 110 miles around the Dingle Peninsula. Across mountainside, through valleys, along beaches and bothareens the Dingle Way casually passes  many ancient archeological sites. Ring forts and Standing Stones, Rock art and ogham inscription all bear witness to the long and varied history of these lands. Megalithic burial sites from Pagan Ireland, Oratories and Beehive huts from the early days of Christian monasticism, castles and field walls from the times of Norman lords all hold their place in the landscape evoking memories of a long past and changing times. Walking the Dingle Way is an exercise in time travel. The Archaeology of the Dingle Way leaves you in no doubt that you are taking part in a story which has been running for a long time. 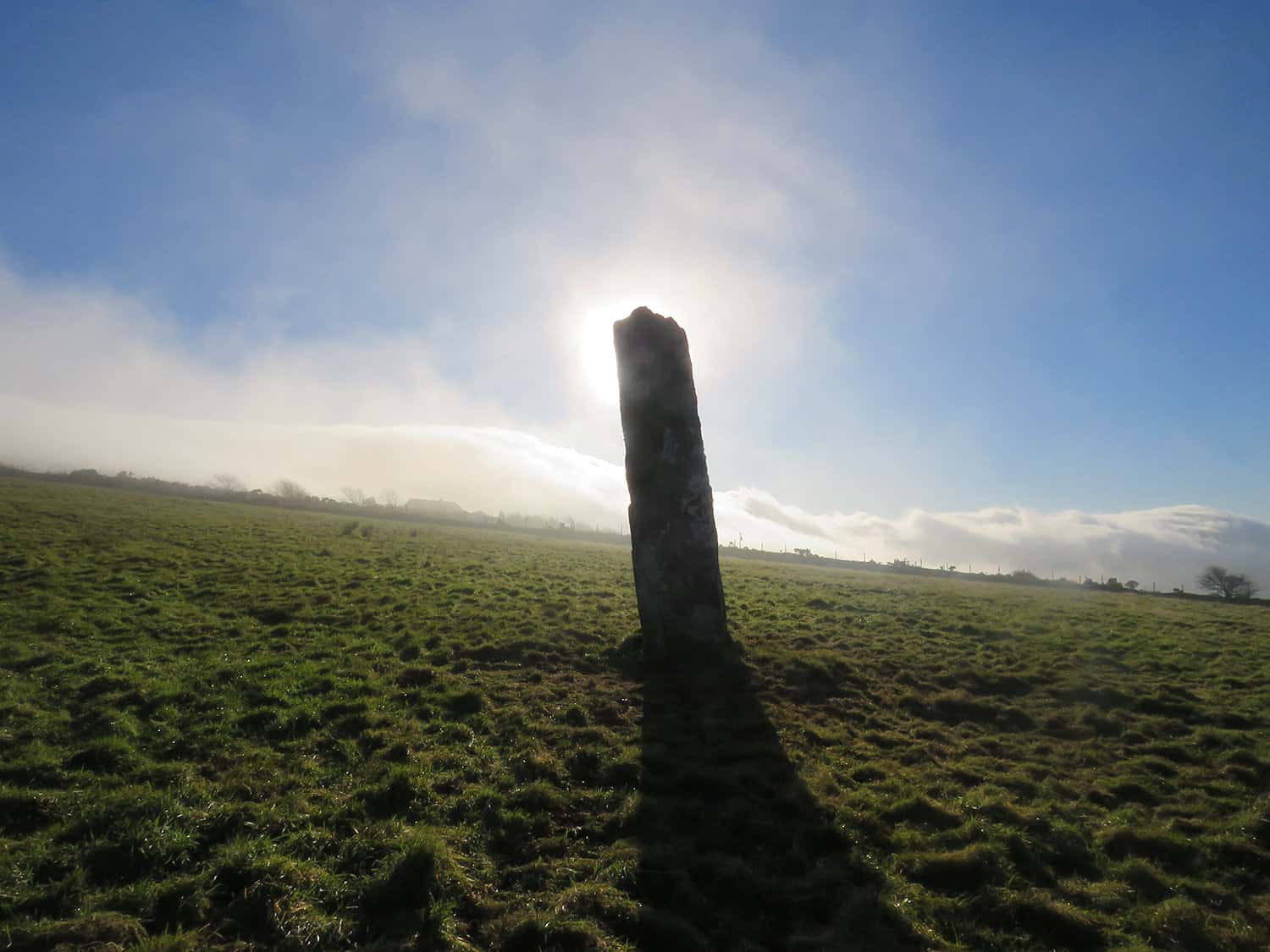 There are near on 100 standing stones throughout the Dingle Peninsula and many are visible while walking the Dingle Way. These stones can be up to four metres high and are found on their own or in pairs or rows.

The Ballintearman Standing Stone is situated  on a hill east of Annascaul and  faces into the valley of Annascaul lake, Com Dubh. This 3.2metre standing stone evokes  the doings and intentions of people living here thousands of years ago. Why did these bronze age, pre-christian people stand these stones at these particular locations? 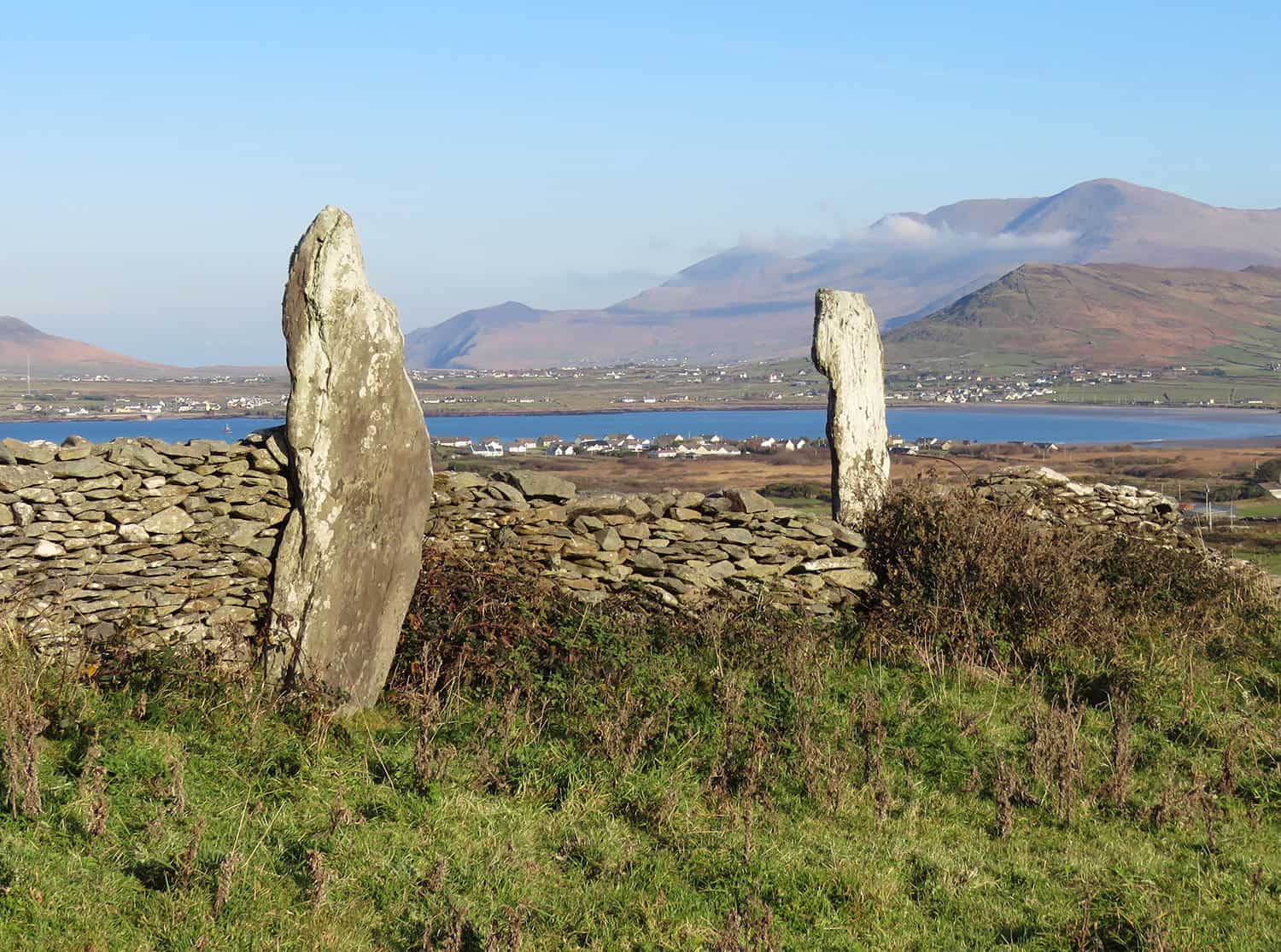 Sometimes standing stones are found in pairs. This is the case with Geata an Ghlas Ghaibhnigh (the gate of the cow) in Baile an Éanaigh.  The cow in question, An Glas Gaineach, is no ordinary cow and is associated with legend through out the country. She was a symbol of fertility being able to provide an unending supply of milk. These two standing stones are over four metres apart and it is said that when An Glas Gaineach stood between them, her flanks touched both stones. In Gaelic mythology, An Glas Gaineach was once owned by Cian, the father of Lugh of the Tuatha de Danann, and stolen by Balor of the evil eye, King of the Formorians. 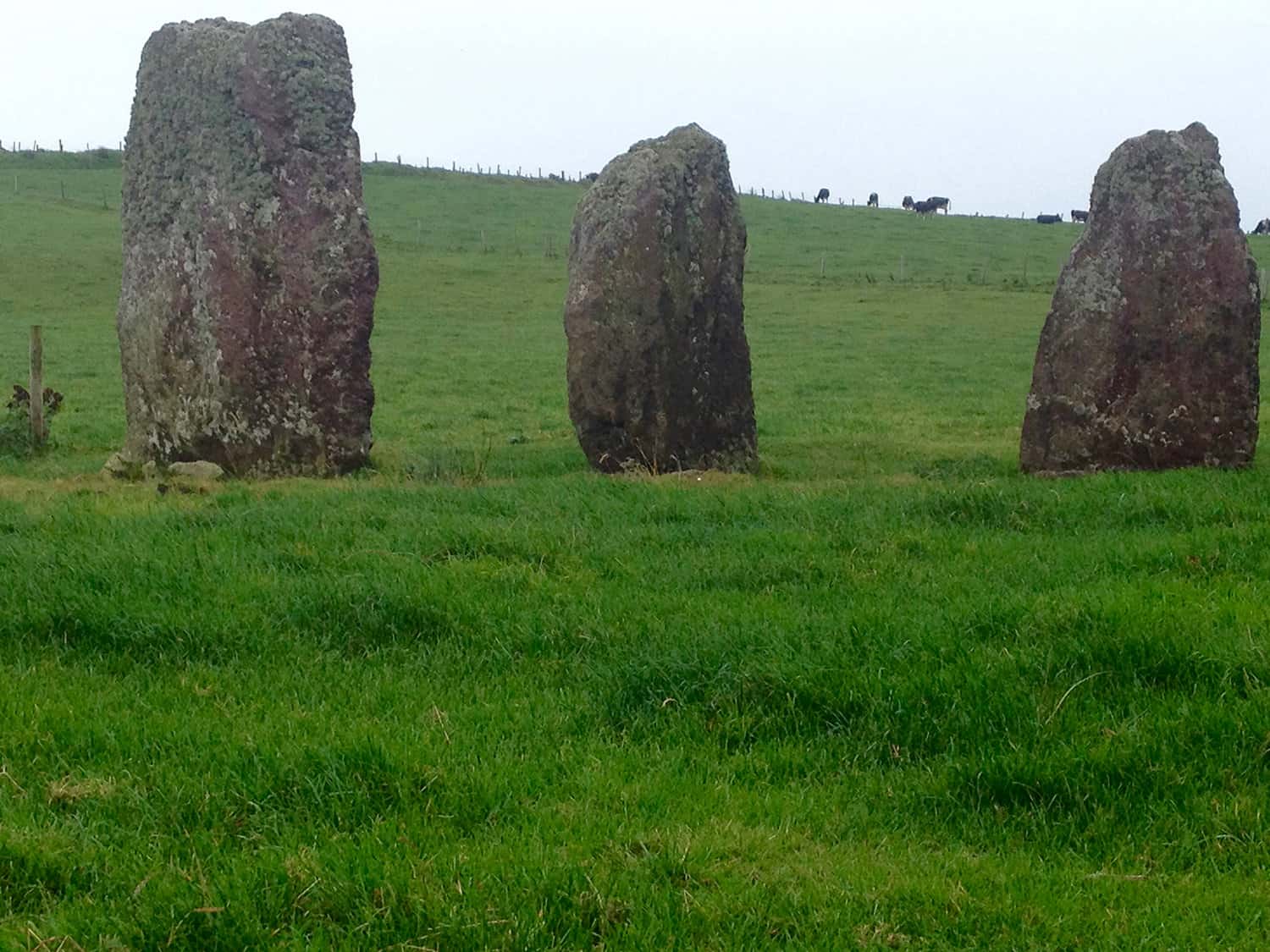 The Ardamore Stone Alignment, Lispole, Co Kerry. Aligned to the position of the setting sun on Dec 21st, the winter solstice, this stone alignment marks a very important day in the turning of the year. From now on dawn will come a little earlier and evening linger longer. From the darkest point of winter the promise of summer is born. This was a very significant event for the gaelic speaking, nature worshipping people who planned and erected this monument.

The Ardmore Stone Alignment is located off the Dingle Way in pasture on a working farm and permission is needed to visit.

Ring forts, also known as fairy forts are by far the most common archeological site to be found throughout Ireland and you will pass by dozens as you wind your way around the Dingle Way. Ring forts, characterised by a circular mound or two, were the type of homestead used by the Gaeil from the iron age into early christian times.

These were times when the wolf (mac an tír – son of the land) still roamed freely. The mound was principally to protect the clan and their cattle. Cattle were the currency of these people in a time before money was in use. The last wolf was killed by a hunter in the mid 18th century but by then these ring forts told a different story. 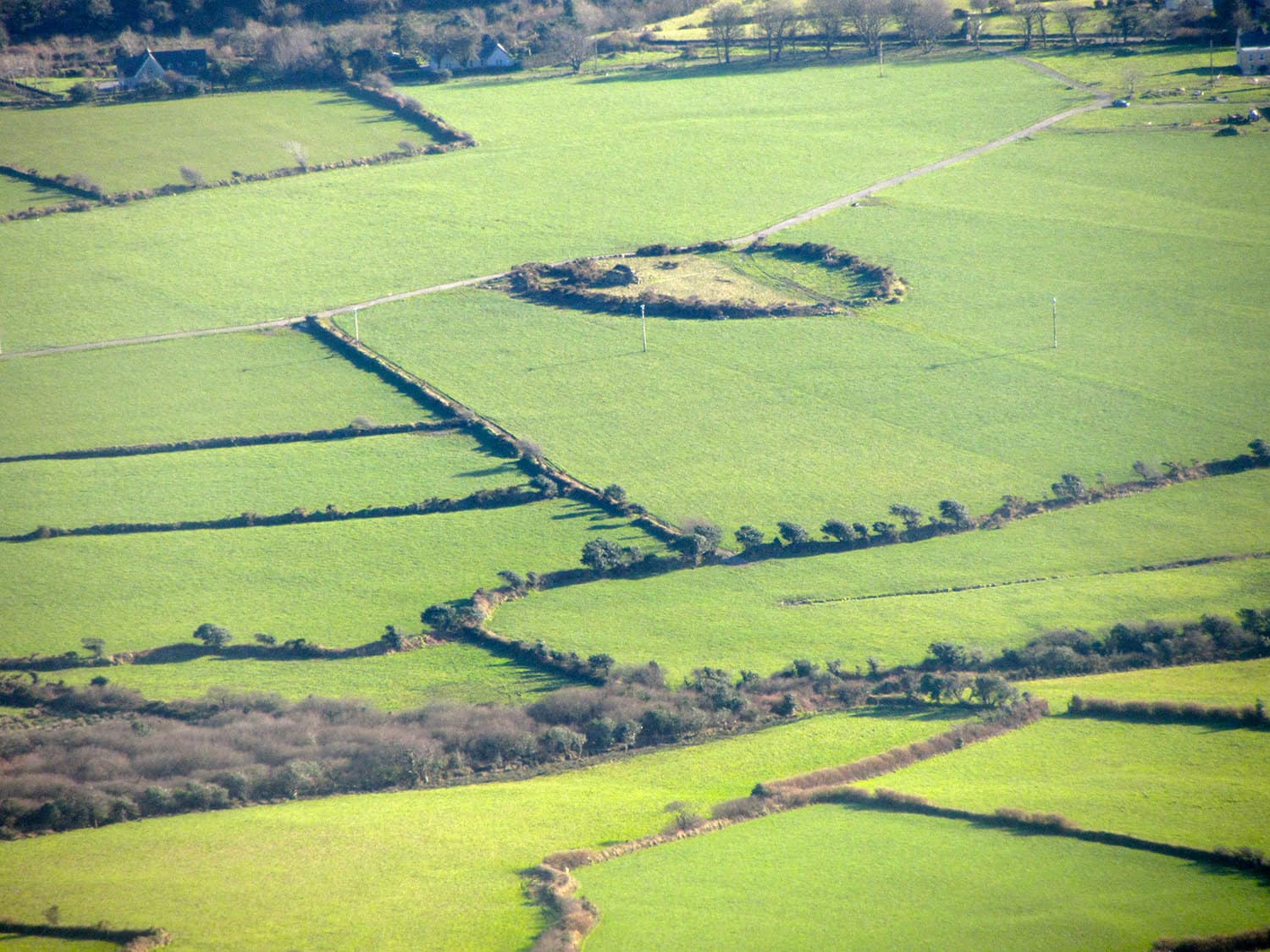 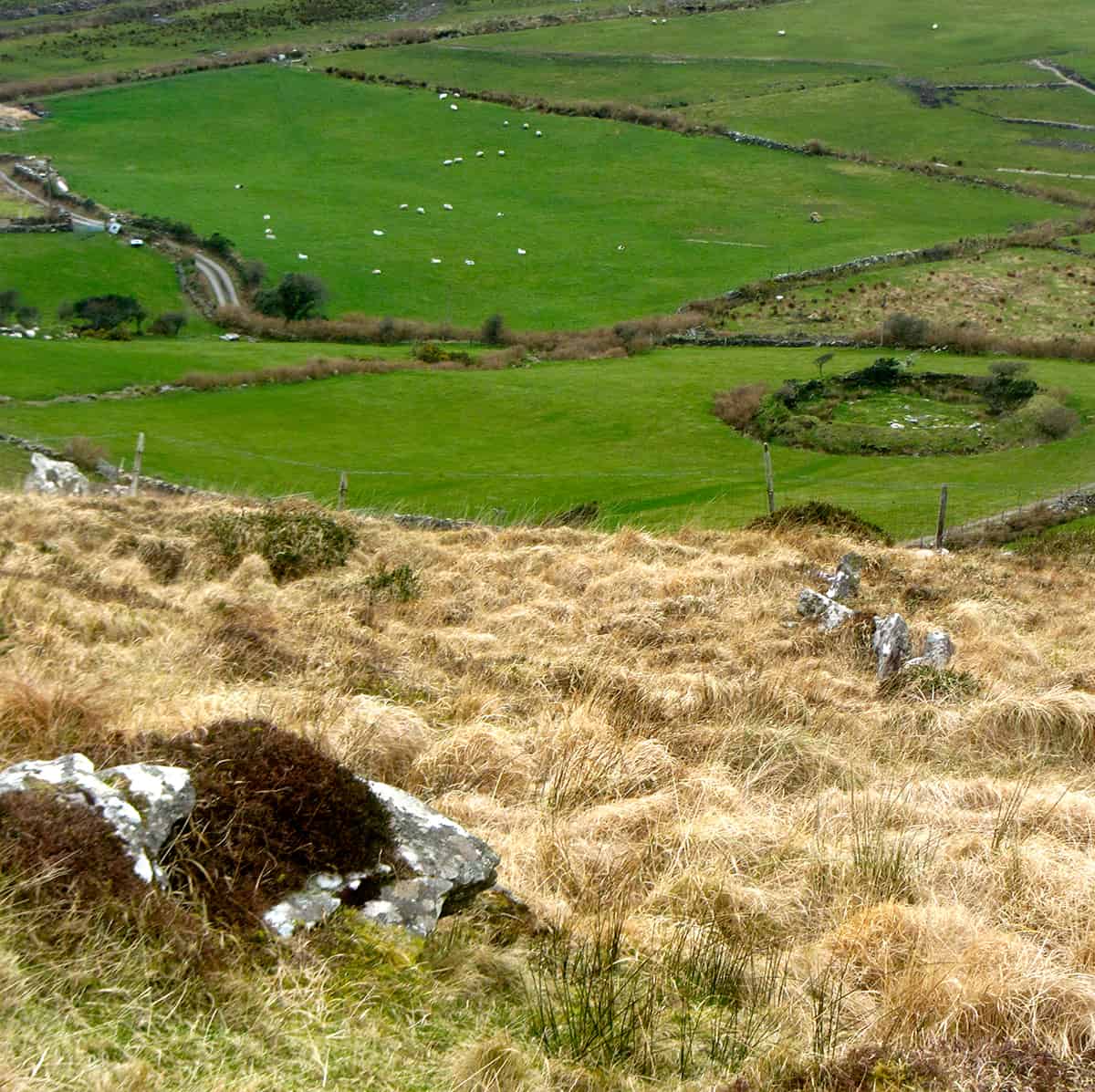 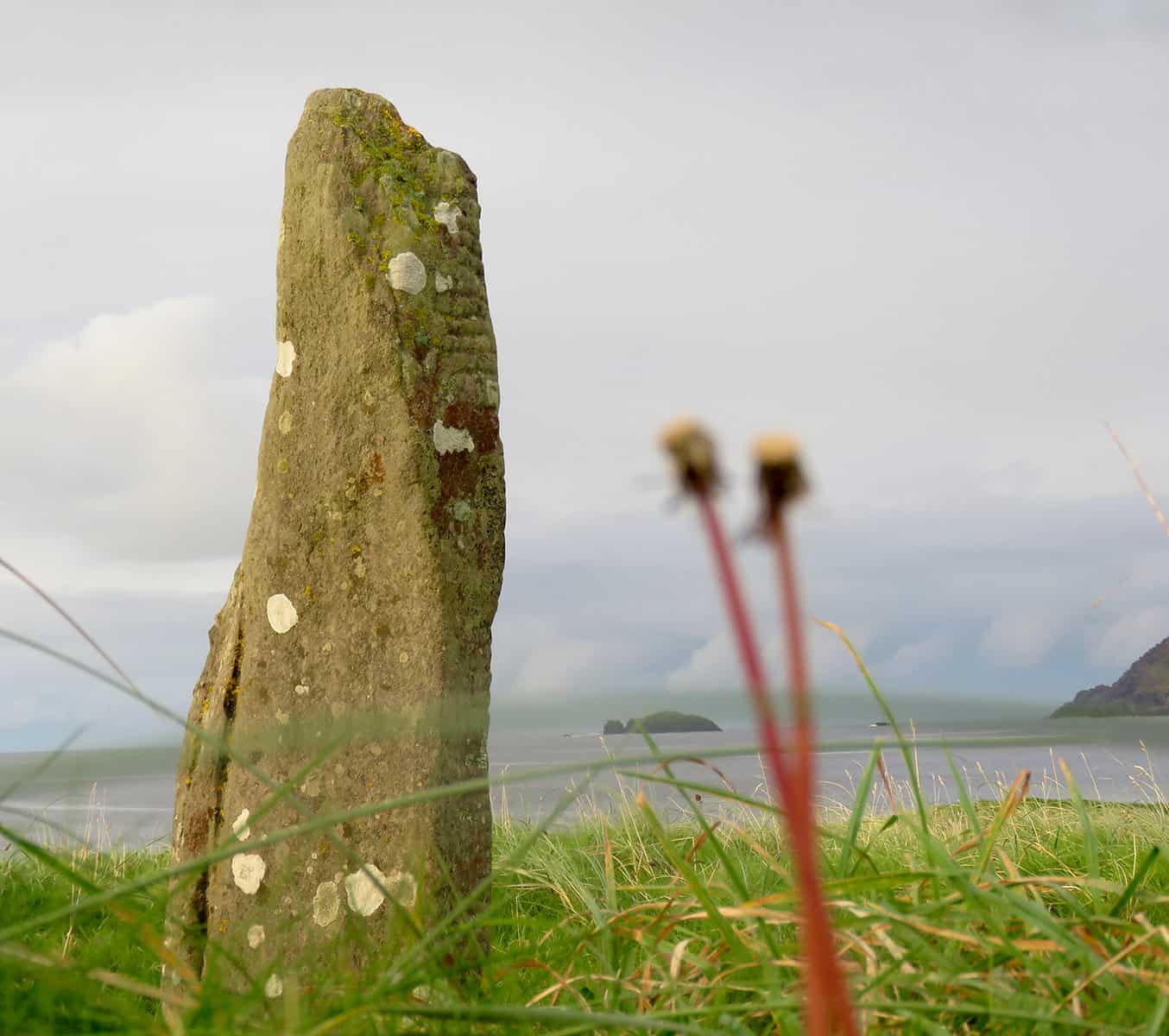 Ogham stones are a very special type of standing stones . Along their sides you will find the Ogham script which is the earliest form of writing in Ireland.  The first ogham stones were erected in the 4th century into a pagan society with a strictly oral tradition. By the time the last Ogham stones were being erected in the 7th century Ireland was a Christian country and literacy was firmly established.

Of the 300 Ogham stones in Ireland, there are over 60 Ogham stones to be found on the Dingle Peninsula, making Dingle the home of Ogham. It is thought that Ogham stones primarily marked tribal territories and the inscriptions followed a pattern of naming family members and the tribe.

Following the Dingle Way west of Dingle towards Slea Head and Dunquin, The Skelligs may be visible on the horizon to the south at the end of the Iveragh Peninsula. Little encapsulates the spirit of early monastic tradition in Ireland as does the iconic Skellig Michael, home of the most extreme example of early Irish christian monasticism which flourished here. From the 6th century right through to the 13th century the Skellig monks gave glory to their God from their monastic cells perched on a small terrace 600ft up the side of a rock at sea, 13 miles from the Kerry coast. 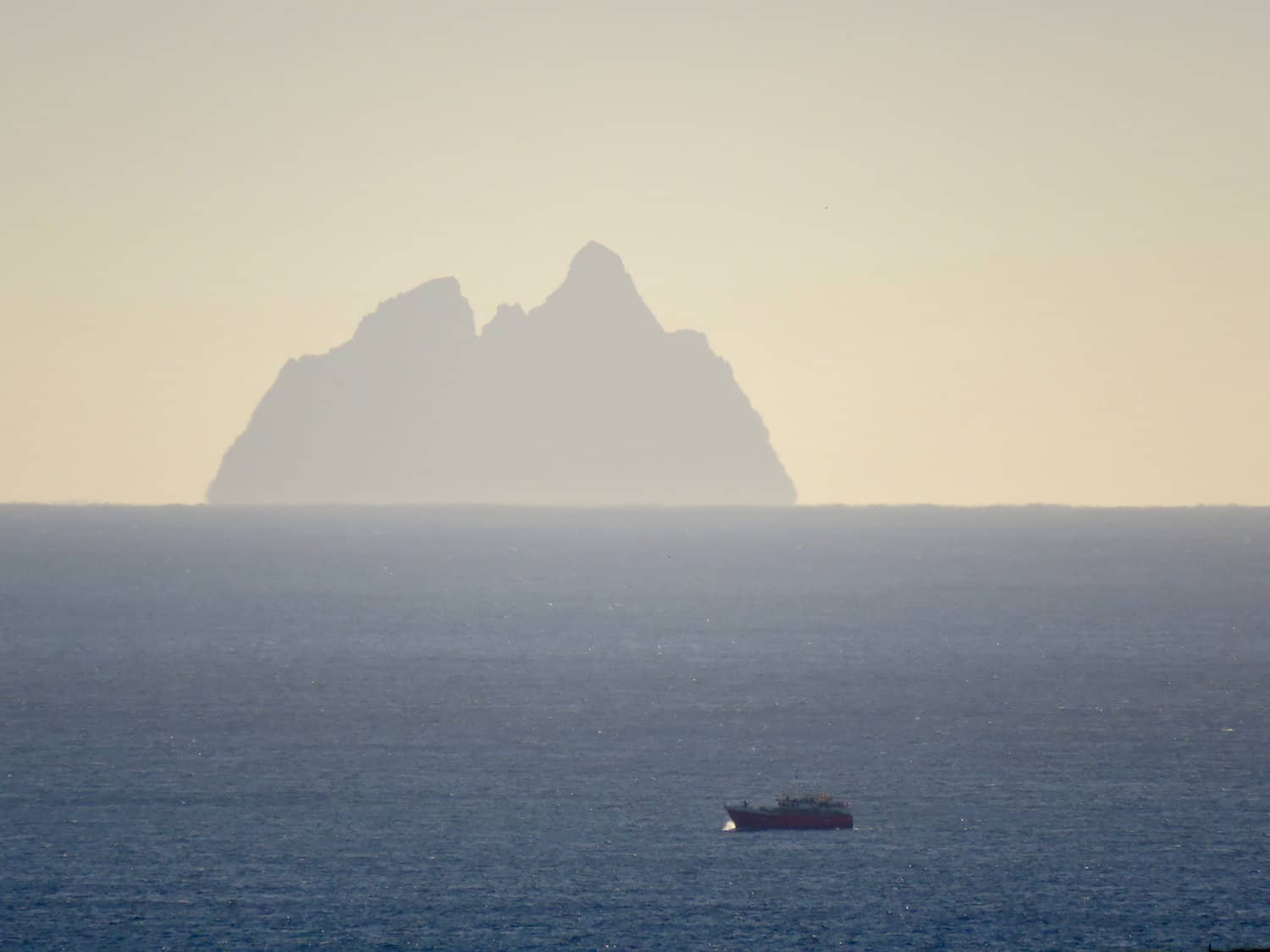 A Unesco World Heritage site since 1996, Skellig Michael recently featured in Star War’s “The Force Awakens”. This is where Luke Skywalker came when trying to get away from it all and rekindle his connection to the one eternal force. Sure where else would he go?

Gallarus Oratory is a perfectly preserved example of the type of church to be found in early monastic settlements on the Dingle Peninsula from the 7th century until the coming of the Normans in the 12th century.

Shaped like an upturned boat and constructed of dry stone, the workmanship of Gallarus oratory can still clearly be seen over a millennium later. 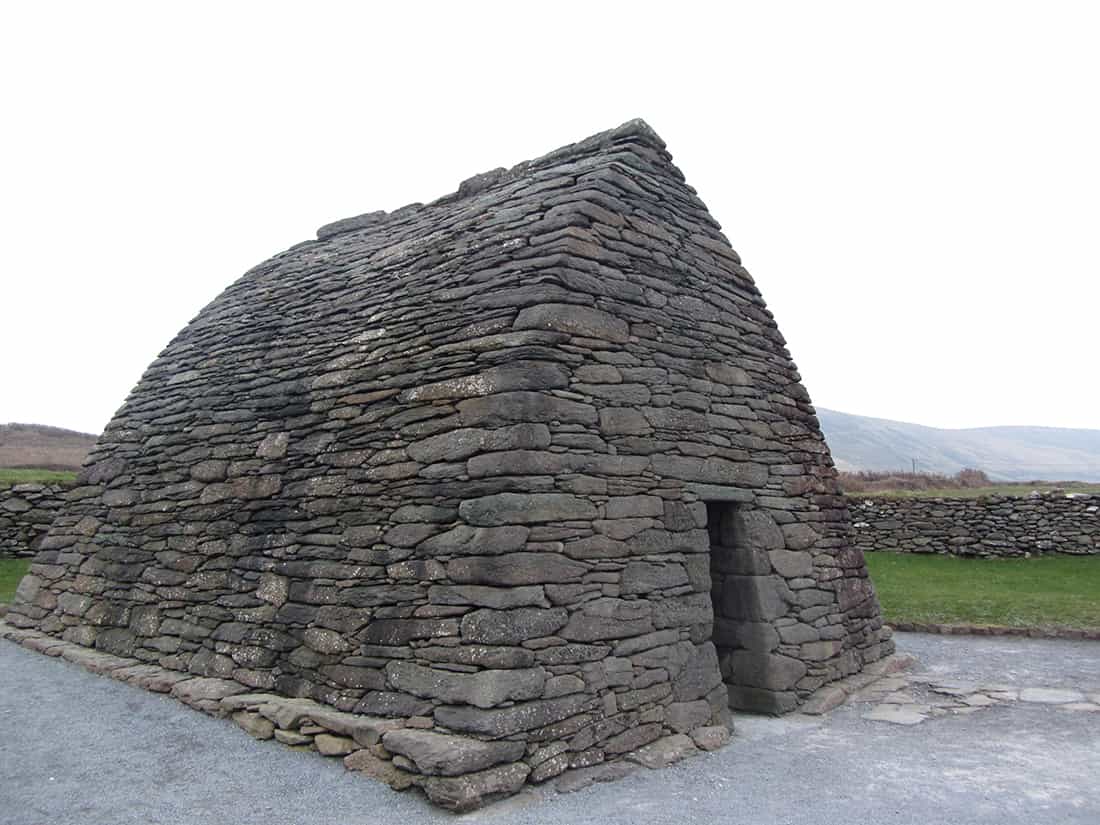 Norman Castles on the Dingle Way 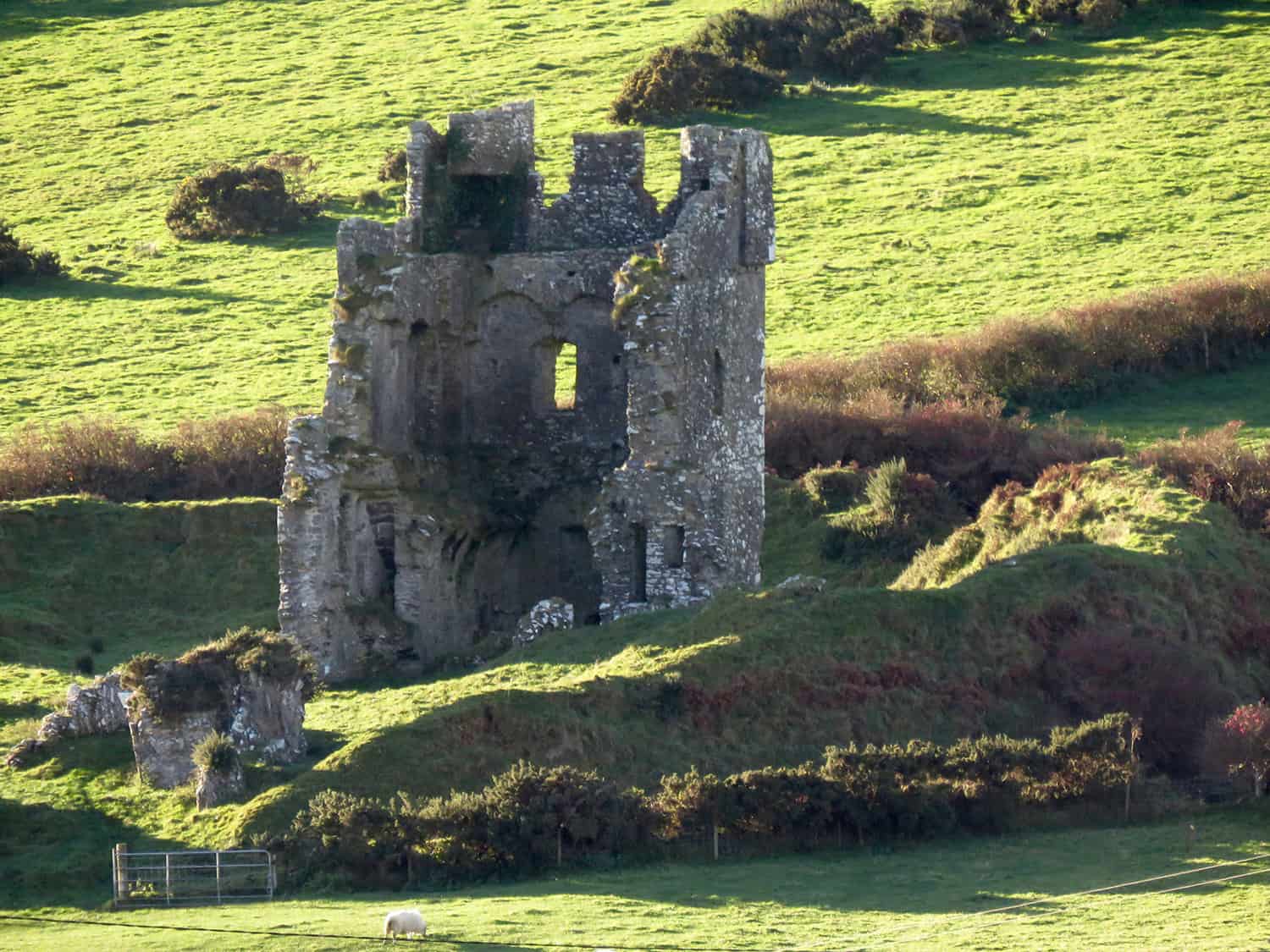 Four Norman Castles, Minard, Firtear’s, Gallarus and Rathinane (pictured) can be seen at varying points along the Dingle Way and all have their stories to tell.

Rathinane Castle was once the centre of power in West Kerry being the seat of the Knights of Kerry.It is strategically positioned on the hill overlooking Ventry Harbour and Dingle Bay. The castle is surrounded by the mounds of an ancient rath of a once powerful gaelic chieftain. Layers of history written in stone in the landscape. 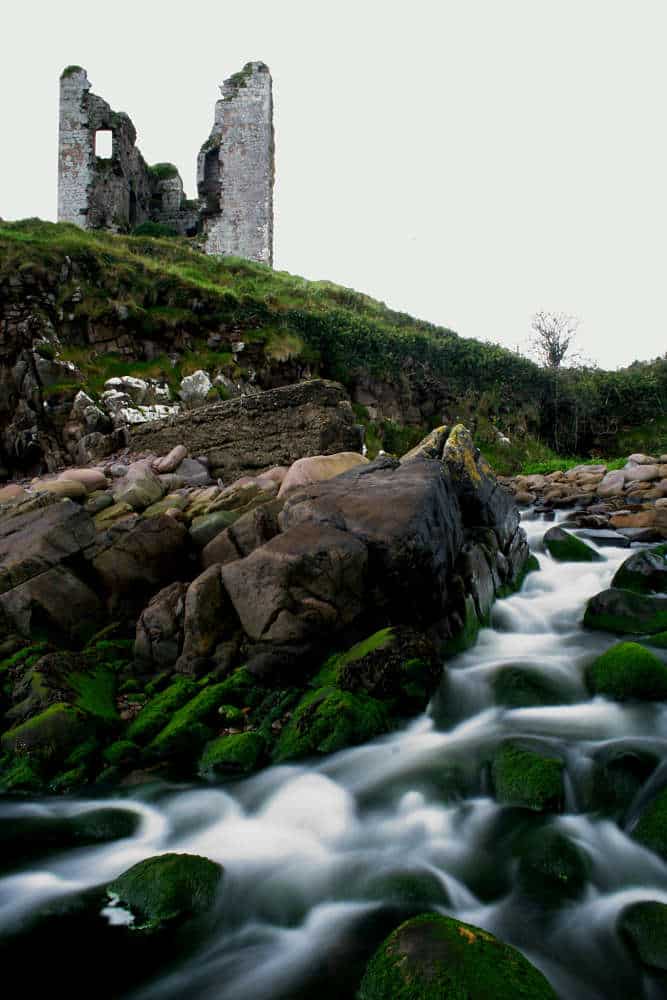 Located overlooking the storm beach at Minard, Lispole, Minard Castle was once one of the strongholds of the Knights of Kerry during Norman times. Built during the 16th century and destroyed circa 1650 by Cromwellian forces as they swept through Ireland, heralding a new chapter in Irish history. Walter Hussey made his last stand here but when Hussey’s men were reduced to firing bullets fashioned from pewter, the Cromwellians sent in sappers to pack the foundations with gunpowder. Most of Husseys forces were crushed in the ensueing explosion thus ending Norman resistance on the peninsula.

Today the building is unsafe to approach having had it’s corners blown out all those years ago and yet she still stands here as a reminder of times past.

Also, a small detour here will bring you to St John’s holy well. Holy wells are not infrequent in the Irish countryside and most probably owe their origins as sacred places to pre-christian times. Holy Wells are often associated with cures for bodily ills and each have their own pattern day. St Johns pattern day in Minard is August 29th.

The Archaeology of The Dingle Way connects us to nature.

The Irish language is still spoken on the Dingle Peninsula, West Kerry being one of a small number of places in Ireland where Irish is still considered the first language of the people. No one knows precisely how old the Irish language is or exactly where it came from but is is a very old language and evolved at a time when people considered the natural world to be a sacred place. As one walks around the Dingle Way, one is constantly reminded of these people. We see their ring forts in the fields as we walk by. We try to imagine why they erected standing stones, no small job, in certain places. What we do know is that they had an intimate knowledge and a sacred respect for the natural world. This is always something worth remembering in the 21st century.

This site uses Akismet to reduce spam. Learn how your comment data is processed.